The duo will make their appearance in Disney Parks this fall AND for a limited time next month, guests will be able preview a sneak peek from Disney’s new animated adventure “Ralph Breaks the Internet” in Disneyland and Walt Disney World Resorts.

Be on the look out for a new, hyper-reality experience, “Ralph Breaks VR”, coming to The Void at Disney Springs and Downtown Disney as well!

Ralph and Vanellope will make appearances on the West Coast in Hollywood Land at Disney California Adventure park beginning November 9 while at Disneyland park, the preview of “Ralph Breaks the Internet” will be shown in 3D at the Tomorrowland Theater. This limited sneak-peek experience will be presented by Mailchimp November 9 to December 9.

The digital duo will also be heading east to Epcot in the Walt Disney World Resort where they’ll greet guests starting November 21 in Innoventions West. Visitors to Disney’s Hollywood Studios will also be treated to an advanced look at a portion of the film, starting Friday, November 2, as part of the “Walt Disney Presents” attraction.

(Don’t worry…Ralph and Vanellope won’t “wreck your fun” at other meet-and-greet opportunities available in Epcot. They’ll be appearing in new locations that won’t affect any other characters currently appearing at the park. Plus, this winter, a new experiment — a portal into other dimensions — will open up a window on the internet for Ralph and Venellope to step through for regular encounters with Epcot guests in the ImageWorks area of the Imagination! pavilion.)

As mentioned, a new hyper-reality experience is coming to The Void at Disney Springs and Downtown Disney as well! What’s The Void? It’s probably better if we let them tell you in their own words: “It’s hyper-reality. It’s technical achievement. But mainly, it’s fun! THE VOID is a whole-body, fully immersive VR experience, full of surprises at every turn; with you, your family and friends inside the action. One second you’re standing on solid ground, the next you’re stepping deep into darkness, looking at unimaginable beauty – or fending off danger from another realm. Did you see it? Did you feel it? What’s next? You’ll just have to experience it to understand.”

Doesn’t that sound amazing?? To sign up to get on the list for more information on “Ralph Breaks VR” or other virtual reality experiences, it’s simple…just visit The Void or contact your Travel Professional.

Are you excited to see Ralph and Vanellope in Disney Parks and to check out their new movie, “Ralph Breaks the Internet,” this fall? Here’s a little snippet to tie you over!

Are you ready to make plans to see Ralph and Vanellope in Disney Parks this fall? Contact your favorite Vacations with Character® Travel Professional to book your next stress-free / wreck-free vacation by clicking here.  Be sure to ask about adding this or other character experiences as well. After all, creating Vacations with Character is what we do best!

Orlando, Florida has to be one of the most magical places on earth. It’s the land of sunshine, fairy tales and family time. In its four hundred and ninety-four square miles you’ll be entertained, amazed and rejuvenated like nowhere else.  It’s a place to reconnect, catch up, laugh, de-stress and feel like a kid again; it’s a place that makes you smile.

The theme a few years ago at the Walt Disney World Resort was based on one word: celebrate!  I personally loved this concept. As we go through the hum-drum moments of our everyday lives we obviously can become burned out, stressed out and just plain worn out. It’s hard to feel grateful, thankful, blessed, and even “connected” some days. We need a vacation to help us get back to what’s important — celebrating our lives and our connections with each other.

Studies show that most people do not take vacations often enough, and in fact, many don’t take vacations at all. That’s a shame! Vacations are not only fun and relaxing, but they are actually healthy for us. They help us recharge our batteries and get back to feeling our best. Our mood, stress levels and quality of sleep are drastically improved for a few weeks afterwards. While our minds, bodies and souls personally benefit, our relationships do too. We strengthen ties when spending quality time and enjoying life with loved ones. We reconnect and actually see each other; we bond.

Orlando is one such place that was designed for celebrating life in every stage. It’s a place that reminds me of many happy times: the look of wonderment in my two year old’s eyes when she met Cinderella for the first time; the memory of my five-year-old son shrieking with delight when the Grinch tried to steal his bag of chips, and sharing giggles over the actions of one very naughty mime at Sea World! :o)  It’s exciting memories of a helicopter ride, wave pools, sea lions and whales, safaris, boat rides, golfing, theme park thrills, and experiencing the Wizarding World of Harry Potter. There are also little, precious moments like those of my baby girl kissing Pluto’s nose, the way “Wishes” brought tears to my eyes, the look of contentment on my sleeping children’s faces, and the echoes of a million other wonderful sounds and magical memories we’ve made together there over many years.

Orlando is our “happy place” here at Vacations with Character® and in our real lives as well. There’s something for everyone, for every vacationing style, and for just about every budget. Your options are as limitless as the memories you’ll make.

It’s never too late to find your happy place. So, go on…book that next vacation and celebrate life! Your loved ones will thank you for it. ♥

Contact your favorite Vacations with Character® Travel Professional or request your FREE quote by clicking here. 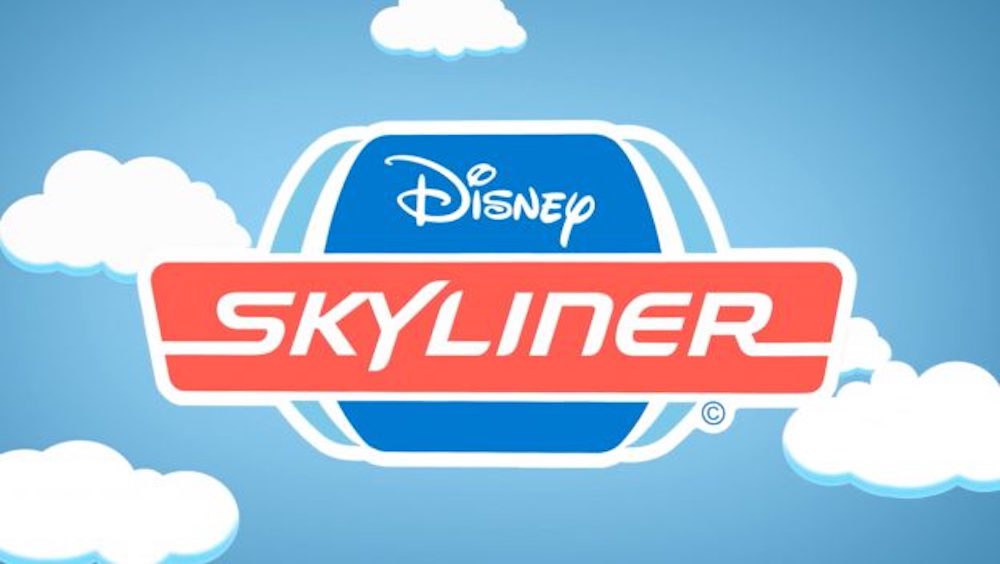 We’ll give you a hint…it’s not the man on the flying trapeze! The answer is: Disney Skyliner — and it will certainly offer an even better bird’s eye view!!

Last year, Disney Imagineers surprised us all with a state-of-the-art plan to move guests across Walt Disney World resort. We have more details to share with you about this new and innovative gondola system that will conveniently connect Disney’s Hollywood Studios and Epcot to four resort hotels- Disney’s Art of Animation Resort, Disney’s Pop Century Resort and Disney’s Caribbean Beach Resort as well as the proposed 15th Disney Vacation Club property, Disney’s Riviera Resort.

Disney teams are quickly making progress and guests have been and will continue to notice construction in many areas. In addition to unique Disney station designs that complement their surroundings, support towers have been popping up across Walt Disney World Resort and will soon be connected with a series of reinforced cables to carry guests in stylish themed gondolas.

As the next phase of construction begins and teams install the miles of cable between towers, guests staying at Boardwalk area resorts should also be aware access to the International Gateway in Epcot may be effected. Boat service to/from these resorts to Epcot and Disney’s Hollywood Studios is rumored to become unavailable after Thanksgiving week and bus service will be offered instead. Disney has not supplied firm dates at this time, however, Swan and Dolphin Resort Hotels, which are not owned or operated by Disney, have begun spreading the word to their future guests. Construction disruption is said to begin as early as November 27 or 28 and continue through December 18, 2018.

Change is always difficult but once the system is in place, Disney Skyliner should be a great option for onsite guests — and a HUGE perk for staying at Art of Animation, Pop Century, Caribbean Beach Resort or Disney’s Riviera Resort (when construction is complete).

Check out this video for a fun look at the new system and keep checking in with us here for future details!

What are your thoughts? Leave a comment, we’d ♥ to know what you think!

For more information or to book your next vacation, contact your favorite Vacations with Character® Travel Professional or request your FREE quote by clicking here.

Have you heard the news?  Inspired by the Disney film, Snow White and the Seven Dwarfs, a unique Character Dining experience is coming to Artist Point, located at Disney’s Wilderness Lodge Resort.

Storybook Dining with Snow White at Artist Point will offer a delicious, dinner with visits from your favorite characters — Snow White, Dopey, Grumpy and even The Queen herself — all set in a storybook theme.

Each Guest will receive a choice of a non-alcoholic fountain beverage (alcoholic and non-alcoholic specialty beverages are not included). However, for an additional cost you may also choose to quench your thirst with creative and fun cocktails (and mocktails) and a variety of beers in bottles and on draft. A wine list with a focus on the most highly rated wines from Oregon and Washington State rounds out the beverage menu.

End your storybook dining experience on a “Heigh-Ho” note with a choice from several delectable desserts that include a “Poison” Apple, Fairy Tale Gooseberry Pie, Miner’s Treasures (sponge cake with chocolate gems and buttercream icing), and The Hunter’s Gift to the Queen, which features cracked maple popcorn and a ganache heart.  Can’t choose your favorite? No worries! The desserts are shared and you’ll receive one of each. ♥

Advance reservations for Storybook Dining with Snow White at Artist Point are open now and up to 180 days prior to your visit for dates beginning Dec. 16, 2018.

Please note the current Signature dining experience at Artist Point will be only be available through Nov. 10, 2018, and as always, menu items are subject to change.

We really think you’re going to dig, dig, dig this ! Contact your favorite Vacations with Character® Travel Professional or book your next storybook vacation by clicking here.  Be sure to ask about adding this or other character dining experiences!