Create the perfect recipe for a memorable escape at Walt Disney World Resort! With this offer, you can enjoy a FREE dining plan when you purchase a non-discounted 5-night/6-day vacation package that includes a room at a select Disney Resort hotel and a ticket with Park Hopper option.

As always, the number of rooms allocated for this offer is VERY limited. Everyone in the same room must be on the same package. Theme park tickets valid for admission beginning on date of check-in and must be used within 9 days of check-in.

Contact a Vacations with Character® Travel Agent to book this magical offer! We specialize in Disney Destinations, including Walt Disney World. We never charge a fee  but our experience and expertise are priceless! Don’t forget to ask about other special offers as well!!

We know many of you have been looking for an update on Disney Skyliner and are glad to share that it has reopened to Guests today!

Disney has asked us to share the following information:

“Following a complete review with the manufacturer, we’ve made adjustments to our processes and training, and we are improving how we communicate with Guests during their flight with Disney Skyliner.  We again offer our deepest apologies to Guests impacted by the malfunction that resulted in extended operating delays on Oct. 5, 2019.

Beginning today, you may travel aboard Disney Skyliner from 8 a.m. to 10:30 p.m.  However, system updates later this week will result in the following modified operating hours for Oct. 16-18:

Similar to ski lift systems, Disney Skyliner may slow or come to some stops during the ride, particularly when we need to accommodate Guests who require additional time to load their cabin.  We want to assure you that the comfort of every Guest is important to us.

We greatly appreciate your ongoing patience and understanding, and we look forward to welcoming you back aboard Disney Skyliner.”

We’re happy to see the Skyliner up and running and can’t wait to be back aboard as well!

Ahoy, mateys! It’s International Talk Like A Pirate Day, and to celebrate, we’re sharing the top 10 ways to experience a Pirate’s Life in Walt Disney World!

1) Dive Into Your Very Own Pirate Tale at The Pirates League in Magic Kingdom. Guests 3 years and up can come aboard for a swashbuckling pirate transformation that can include a hairstyle, facial effect and other special treasures. Or choose a deluxe head-to-toe makeover into a mesmerizing mermaid or pirate captain!

2) Play A Pirate’s Adventure ~ Treasures of the Seven Seas. Join an interactive hunt for secret treasures hidden throughout Adventureland. Just head over to The Crow’s Nest and pick up a talisman that magically allows you to read a secret treasure map. Then it’s all hands on deck as you hunt for treasure!

3) Younger scallywags 4 to 12 can fearlessly channel their inner pirate on water with Pirate Adventure Cruises, which feature fun activities like donning bandanas and treasure hunting like true pirates.

4) Seasoned sailors and dessert lovers can set their sights on The Pirates & Pals Fireworks Dessert Voyage. Enjoy a boat ride starting from Disney’s Contemporary Resort that includes a treasure trove of delicious dessert options, perfect for snacking on before meeting Captain Hook and Mr. Smee.

5) Experience a swashbuckling attraction and pretend you’re a Lost Boy or one of Captain Hook’s crew on Peter Pan’s Flight in Fantasyland. Climb aboard a gentle pirate galleon and set sail across the sky to Never Land!

6) Embark on a thrilling adventure on Pirates of the Caribbean in Adventureland, which features a lively Halloween overlay exclusively offered during nights of Mickey’s Not-So-Scary Halloween Party.

8) Those interested in nighttime family-friendly frights can shake hands with the most fearless pirate in the Caribbean, Captain Jack Sparrow, in Adventureland exclusively offered during nights of Mickey’s Not-So-Scary Halloween Party – or catch Jack sparring with Captain Barbossa aboard their ship during the “Boo-To-You Halloween Parade.”

9) For buccaneers 4 to 12 with still more energy to burn, Disney’s Beach Club Resort offers a fun and safe evening of mischief with a pirate’s feast included. Because after a full day of pirate living, everyone can use a little treasured rest and relaxation!

10) Check into the Captain’s Quarters and walk the plank into your comfortable pirate-themed quarters at Disney’s Caribbean Beach Resort to relax and recuperate from a thrilling day in the life of a pirate.

If a pirate’s life is for you, contact us and we’ll be sure to help you plan a swashbuckling adventure! 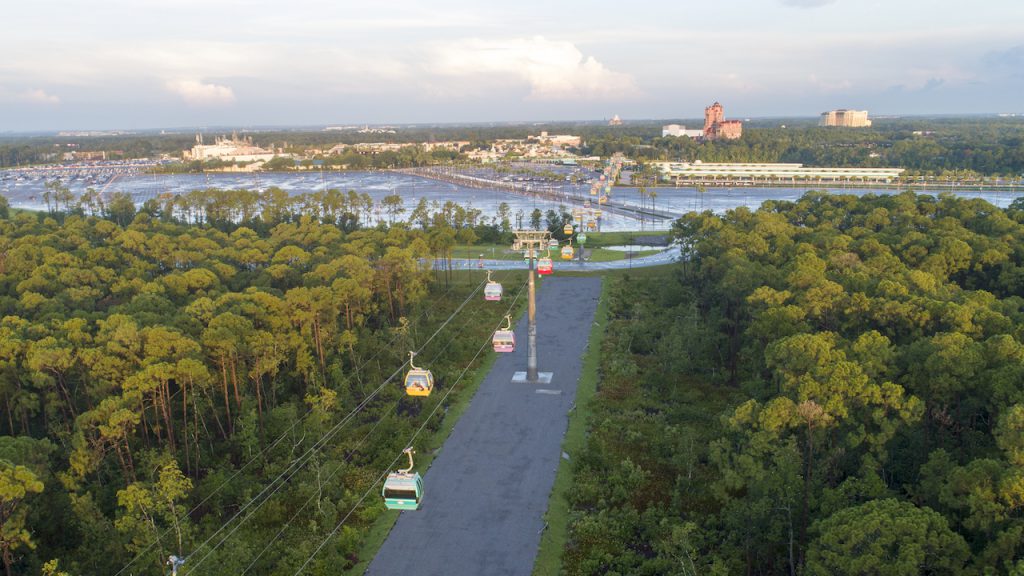 Some Disney Skyliner cabins feature graphics based on Disney films, attractions and characters. Disney stories taking flight with guests include:

We are SUPER excited for this new and much needed transportation option. Which car will be your favorite?